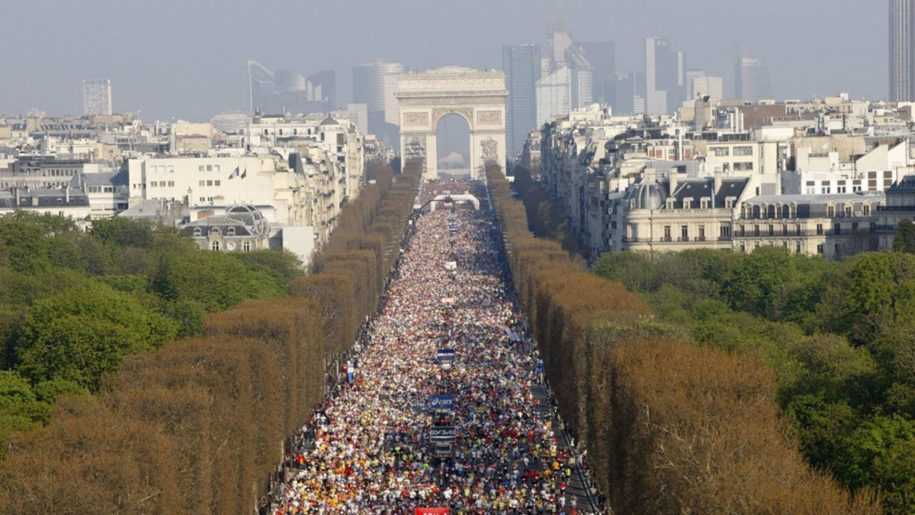 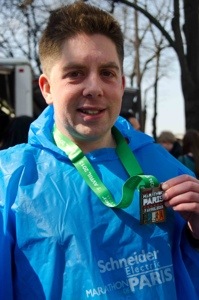 The race took place on April 7th and started on the Champs-Élysées. I’ve never seen the Metro in Paris so busy as everyone makes their way towards the Arc de Triomphe for the start. I arrived about half an hour before my pen (3:30) was schedule to start the race, leaving enough time to get ready and into the starting zone.

As Vangelis’s Chariots of Fire blasted out of the speakers along the start, the waves of runners started to move forwards and we were soon off, heading East along the street of Paris. The route is circular, heading out to the large park, Bois de Vincennes before looping back around and heading West along the river Seine to the Arc de Triomphe.

I still don’t think that the enormity of the challenge had sunk in until we reached the later stages of the race. In training I had raced in two Suffolk half marathons in Great Bentley and Colchester and had also raced in the Tarpley 20, hosted by the Bury St Edmunds Pacers. I had also run up to 22 miles in a training run but that was as far as I had got towards the magical 26.2 mile mark. Roughly 12 miles into the Marathon my calf began to tighten (a recurring injury picked up during training) and became quite painful. I did contemplate stopping at one point, but having traveled so far, both in training and geographically, I couldn’t bring myself to do so!

As we continued towards finish and the park Bois de Boulogne, I found the distance become increasingly challenging. My pace remained consistent to around 21 miles, however, over the next five miles it began to decrease as my body and legs became tired. It became more of a mental challenge than anything, as so many people around me slowed to a walk, I just needed to keep my legs turning and reach the finish line.

The support was amazing along the whole route, with crowds cheering on the 40,000 runners and bands of all genres playing music to keep the runners going. I managed to see my family and girlfriend at two points during the race which was a massive boost – especially at the 25.5 mile mark! The sites were spectacular, seeing such landmarks as Notre Dame, the Eiffel Tower and The Louvre as you wind through the historic city streets.

It was a fantastic experience and I was extremely happy with my official time of 3:20:37.