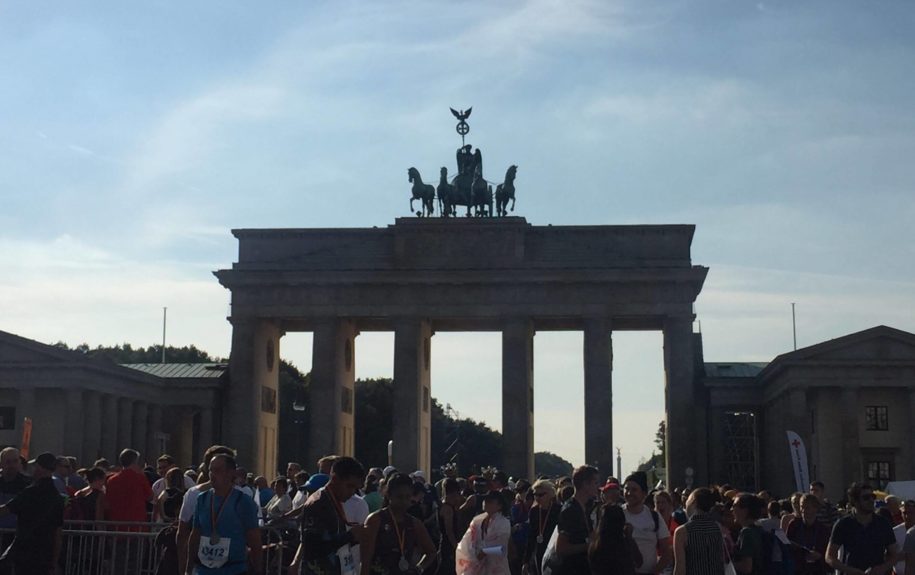 Last October I received a text message from my mate Chipper, who lives in Austria, I remember what it said… “If you’re hunting for a PB next year, Berlin closes 1st Nov!”. I didn’t hang around, a couple of hours later I just replied with “In for the ballot. Done”. I then forgot about it until December 1st, which happens to be the day that I received an email from BMW Berlin Marathon confirming my entry in the race!

With an Autumn marathon in the calendar I decided not enterÂ a Spring road marathon. Instead I trained for the CTS Sussex ultra in March, followed by the Stour Valley Marathon in June. Stour Valley just happened to be the day before my Berlin training program started.

I wanted to try and achieve a PB and, if possible, a London Good For Age (GFA) qualifying time. Berlin is known for being a flat and fast course, it’s where the World Records are set. Looking back at 2016, I think that my desire to achieve a PB was increased due to the Greater Manchester Marathon, home to my previous PB in 2015, being found to have a short course. My Manchester PB was declared null and void in the eyes of UK Athletics and reverted back to my first marathon, Paris 2013.

Marathon training isn’t easy. If you’re looking to push yourself and runÂ your ideal time it takes time and effort. Runner’s World published some Garmin-ready training plans a few years ago and I’ve always tended to follow these traditional training plans. These include a couple of speed sessions, a tempo run and then a long run with some easy runs in-between. Â My average training week would look roughly like this;

This Summer had a few hurdles to overcome in training. I started myÂ training with a glute injury, picked up through not resting after my ultra earlier in the year. This flared up during the Stour Valley marathon and I had a few sessions with the excellent James Lee-Barrett who managed to fix me up!

I also married my wife Pip on 12th August, so around training and my full time job, with my Pip’s help I had to prepare for the wedding, factor in a stag-do and honeymoon. Weekend long runs had to be dropped or re-arranged for the weeks that I was away and whilst away on honeymoon for two weeks my mileage decreased significantly (I did fit in a few cheeky runs over in Thailand, it was so hot I was practically melting!). However, I tried to make up for it the rest of the time and put in some of my highest mileage weeks ever, peaking at around 70miles.

The biggest change to my training this time was toÂ move all of my running to the morning. I used to mainly run in the evening after work, however could never guarantee what time I was going to get home. An evening runÂ wouldÂ start at anytime after 6:30pm depending on the day, fitting in a shower and dinner meant that runs were sometimes rushed and not of the best quality, I would fit in whatever I could. Running in the morning meant I could wake up in plenty of time,Â do a good quality session have breakfast and still be into work early. I felt so much better running the morning and think that my sessions were of a much higher quality than tired runs after work.

Due to Pip’s work we had to be back in England for work on Monday morning, so it was a bit of a flying visit over to Germany, arriving late on Friday night and flying back late Sunday night. This gave us the whole day on Saturday to collect my number for the race from the expo and then do a little whist-stop tour of the sites including the Brandenburg Gate and Checkpoint Charlie. Staying in Potsdamer Platz made itÂ really easy to get around and it was really close to the marathon start outside the Reichstag. 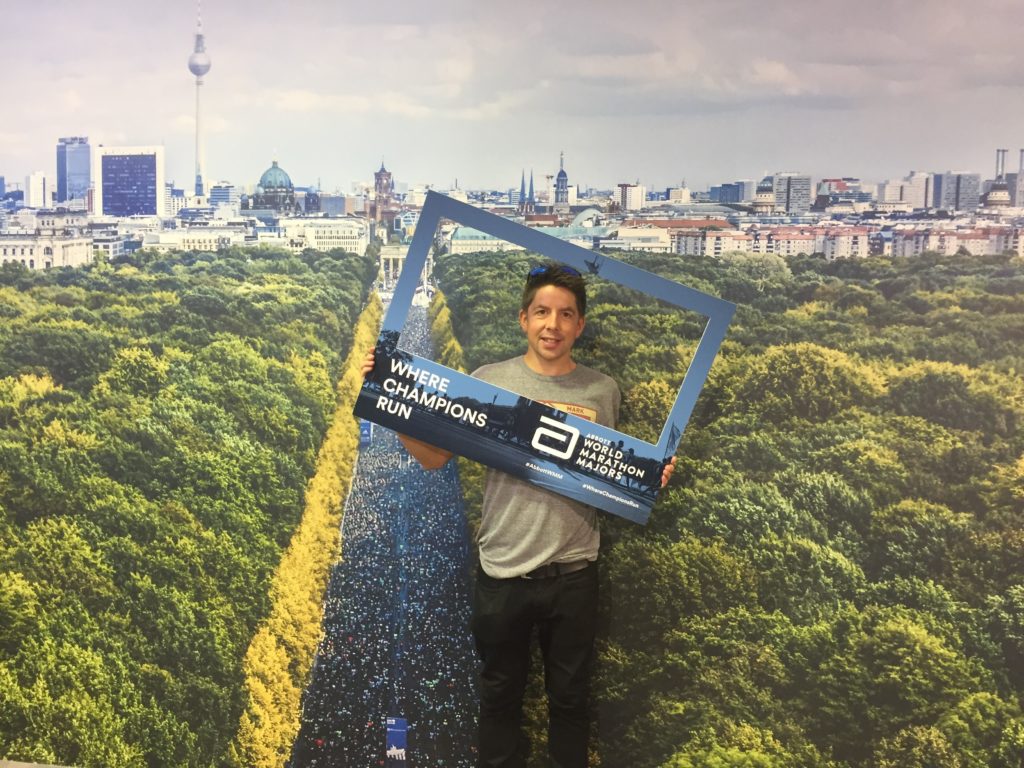 The expo wasn’t very well sign-posted and after a little bit of aimless wandering, asking people for directions to then be sent in circles, we found the location (thankfully a Three PAYG sim-card and Â£10 credit meant I had access to the internet and Google Maps on my phone – very handy!). The expo was really well organised and I had my number within minutes. They print the number there and then in-front of you and set up your chip, so there’s no waiting at a specific desk like at the London Marathon expo. There was the usual stalls and stands at the expo advertising and selling kit, nutrition and marathon trips along with a huge scrum for official Berlin kit – they seemed to have understocked everything in smaller sizes and people were literally grabbing whatever they could get their hands on.

Berlin starts at 9:15am, so it was quite an early start to get ready, have breakfast and get to the start line. Luckily the hotel put on an early breakfast for those running the marathon and judging by the number of people there, I think that everyone else in the hotel was also running!

HeadingÂ to the start line at around 7:15am allowing plenty of time to get to the start area and drop off my kit bag. We had allowed some time to try and meet my mate Chipper in the coffee shop near the start but he had been delayed due to the S-Bahn and didn’t make it. We left after a quick black coffee and headed towards the start area which is where we then accidentally bumped into Chipper and his wife Tiff.Â Â He’s run Berlin before so it was quite good to be with someone who knows where they are going. Dropping off my kit bag before heading towards my start zone, everything was really well organised and I didn’t feel like I was rushed at all to get to the start.

Organised in pens from A – H, the start blocks had plenty of room and after finding my designated zone of D, I was able to settle in and watch the elites start on the huge screen in front of me. The start blocks were spacious and you knew that you’d have plenty of room to run after crossing the line.

OnlyÂ a minute and half passed before I found myself moving forwards towards the chip mats and the start line. I hit the start button on my Garmin and headed off into Berlin and the unknown! Pip and I had come up with a plan which would hopefully mean she would see me and be able to give me a cheer and some much needed encouragement at around 7km, 2okm and then again at 38km.

As I settled into my pace, I became aware that a lot of the runners around me were all going at a very similar speed and this made it really easy to maintain a consistent pace. I’ve taken part in some events, such as the Great North Run, where there seem to be a lot of runners in the wrong start zones and it can make getting going really start/stop as you try to pass people.

I had a plan. To try and best as I could to do 7:03 min/mi (the pace needed to achieve 3hrs 5mins) consistently and then if I was feeling good, push on. I started conservatively, around 7:04-7:06 min/mi, which felt relatively comfortable and when I had to cross a bridge somewhere around 5km, it felt like a bit of an effort and there and then I could tell just how flat Berlin was! The course is known for its wide and flat roads, which is why so many marathon world records are set there.

I caught site of Pip at the 7km mark and gave her an enthusiastic wave before carrying on through Berlin. I’d read in the race information that there are bands around every 500m and I don’t think this is too far off. There were lots of different bands around the course, getting the crowd going with their music from rappers, guitarists and drummers to rock and reggae. The crowds were brilliant too with a large presence around the whole course and their cheers help to propel you around the roads. Firefighters had their hoses out, providing showers for runners and running crews who were out setting off flares and glitter cannonsÂ as their runners came past.

I slowly increased the pace towards 7:00 min/mi and just before half way I was comfortably below 7:00 pace, starting to hit the mile splits on my watch around 6:56-6:59 min/mi. Knowing that I would see Pip again at half way was keeping me going, however I went through without seeing her and only afterwards did I realise that she had only just missed me as I was going slightly faster than anticipated!

16 miles in and my head was starting to tell me that my hamstring felt tight and my legs were getting tired. What a load of rubbish! It took me back to something that I’d read in Lizzy Hawker’s book about the UTMB, where after running all night she emerged into the morning and told her body that it was a new day, so therefore she should feel like she was starting all over again on fresh legs. I decided not to let my head get the better of me, there was nothing wrong with my legs and instead continued to push on interestingly I keep a consistent pace over the next few miles at 6:57 min/mi and then push on to 6:53 and 6:55 , I knew that it was a load of rubbish!

The course weaved through South West Berlin before making its way back towards the centre and Potsdamer Platz which is where I sawÂ Pip for the second time. The road was wide and I was able to run over to her,Â giving a wave as I went by. There was less than 5km to go as the course ran East towards Mitte, before looping back towards the Brandenburg Gate and the finish line. The time onÂ my watch readÂ 02:4x and knew that my target time was on the cards if I could just holdÂ it together over the next couple of miles.

Pushing on as hard as I could, I definitely felt that I was outside of my comfort zone as I headed towards

the Brandenburg Gate and the finish. I felt dehydrated, my legs hurt but I could see the clock on 03:03:xx and knew that if I ran hard I could possibly get within 03:03, if not it would be 03:04. Crossing the finishÂ line, I looked up to see 03:04:06 on the clock – YES! Within my target time and a London GFA qualifier (provided they don’t change it before entry opens in June 2017).

The Berlin marathon was an awesome experience. It’s well organised, there’s plenty of space to run and water stations and isotonic drinks are available at regular intervals on the course. You get to see all of the sites as you run around this historic City and the support from the crowds is amazing. I’ll definitely be entering the ballot again for next year.