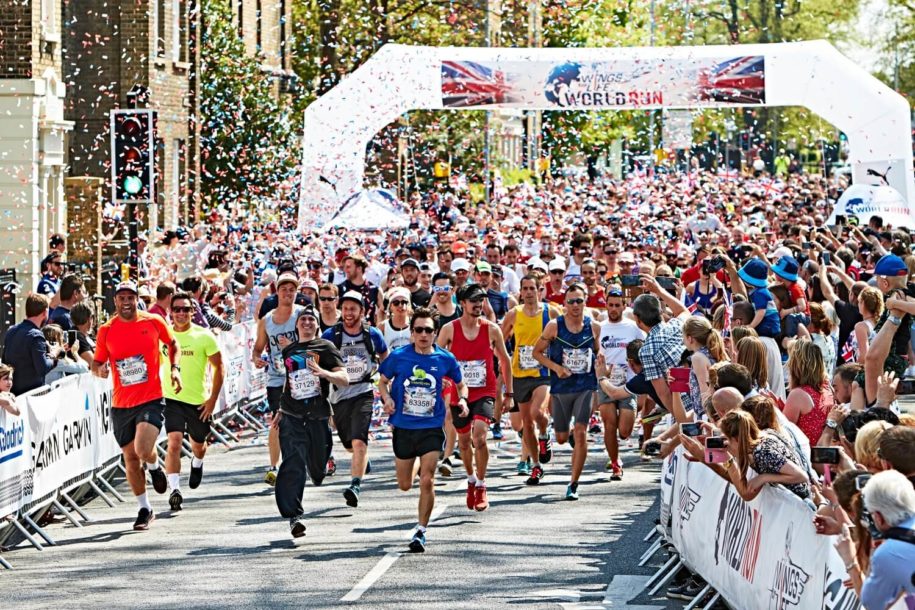 I first heard about the Wings for Life World Run last year in 2015. I religiously listen to the Marathon Talk podcast and in Episode 278 they featured an interview with Kate Carter, Lifestyle editor at The Guardian and editor of their Running Blog, who finished first UK female last year. It sounded like a brilliant event and after I saw that the 2016 edition was coming to Cambridge, just an hour down the road, it wasn’t long before I signed up and had my place.

It’s a unique concept for a running race, whereby all runners and wheelchair competitors set off at the same time, 11am UTC (12pm BST) across 34 countries around the world. Half an hour later, a catcher car sets off and gradually increases it’s speed. As soon as the catcher car overtakes you, you’re out of the race and the concept is to run as far as you possibly can before you’re caught! With everyone running at the same time around the world, you’re aiming for both your country position and also a global position.

As well as being a race, it is also raising money and awareness for the Wings for Life Spinal Cord Research charity with participants being encouraged to raise money and 100% of entry fees going to the charity.

Arriving at Parker’s Piece in Cambridge City Centre on Sunday 8th May, there was a real buzz and excitement surrounding the event. Headline sponsors Red Bull and Garmin were set up in the park with F1 cars on display and handing out drinks, freebies and sweatbands. A huge screen beamed coverage of the different events around the world, co-ordinated from the Race HQ in Saltzburg, Austria,
showing clips from previous years and interviews with Red Bull athletes. The catcher cars were all to be driven by Formula 1 drivers and Cambridge had David Coulthard at the wheel.

Wings for Life 2016 landed in the middle of a mini-heatwave for parts of the UK, including Cambridge, and the average temperature for the day was expected to be around 25C. I’ve ran a few races in the heat previously, including a couple of half marathons around June and a trail marathon in August last year. It’s got to be said that I much prefer the cooler weather for running. I wasn’t entirely sure how to pace this one, as theoretically, you’re not quite sure how long you’re going to be running for! I decided that I’d go out somewhere around 20 mile race pace-marathon pace and see how I got on, I could always slow it down if necessary.

I had a good first few miles and as the course made its way through the centre of Cambridge there were some big crowds lining the roads and cheering us on. I settled into my pace and was running some consistent splits. The course headed out of the City, over the A14 and out onto country roads, weaving through very picturesque countryside and small villages. The country roads were very exposed, providing no shade from the midday sun and after a few miles it was really possible to notice the effect of the heat and sun, contributing to energy depletion and making the running really hard work. The support through the villages was brilliant with crowds providing refreshments and spraying down runners with water from their garden hoses. The official aid stations were really well stocked with water, Red Bull, jelly babies etc and after a few miles of being without a drink, it wasn’t long before I ensured I had a bottle of water in my hand at all times.

As the race went on I slowed to a pace where I felt comfortable, stopped at a couple of the water stations, walking for a little while whilst pouring water over my head to stay cool, before getting up and running again. It was hardwork and I think that in hindsight, I should have started off at a slower pace, I certainly didn’t account for the heat in my pacing strategy!

It’s a strange feeling when you know that the catcher car is on its way. I could hear people shouting from quite a way behind and glancing back I could see the cars and their entourage of motorbikes and emergency vehicles making their way towards us. I put my foot down and kept going, even breaking into a sprint, keeping the catcher car at bay until David Coulthard finally caught me, just short of the 28km / 17.4 mile mark (Strava route and splits below). I was really happy with how far I managed to get, finishing 97th / 85th male in the UK and 4221 in the world ranking.

Next year, I’ll be looking to beat 28km and who knows, it may even be in a different country!