Race to the Stones, a story of my first 100km

100km, my second long distance ultra marathon in three weeks, the furthest I’d ever run. This certainly hadn’t been the plan at the beginning of 2017, but I enjoy a challenge and at least it would make for an interesting race, I had no idea what would happen – would my body cope for a second time? There was only one way to find out…

2017, a new year; new resolutions, a chance for a fresh start and always new running goals. I’d decided that this year was to be the year of the ultra marathon, a chance to push myself both in endurance and distance, going further than I’ve ever gone before.

I’d heard good things about Race to the Stones (RTTS), a 100km ultra between Watlington and Avebury stone circle in Oxfordshire, from previous competitors and through online reviews. During a brief chat over a couple of beers with a friend I discovered that he was planning on taking on the two day option with an overnight camp at half way. A quick check in the diary revealed that I was free and I pulled the trigger, quickly entering online for the 100km in one day – Race to the Stones was my next challenge in 2017.

Fast forward several months and I’m driving into a farm in Watlington, Oxfordshire, it’s a cool July morning shortly after 6am and as we make our way across the fields to the car parking area, the Threshold Sports and Race to the Stones banners can be seen looming up ahead.  A good friend, Matt Hunt, had entered the race only a couple of weeks before. He’d had a good run of training over the last couple of months and wanted to put his running fitness to the test – what better opportunity. We met at the start and we’d discussed in training that we’d both run the race independently, at our own pace, as over 63 miles a lot can happen with the ups and downs, and I don’t just mean the hills, taking their hold. Setting off together in the first wave at 7:30am we headed out of the farm land and towards The Ridgeway, the ancient path that would lead us to the stone circle at Avebury.

Three weeks after Race to the King (RTTK), a double marathon along the South Downs Way, I was a little unsure as to how my legs would handle RTTS. I had a feeling that it was going to be both a mental and physical test of endurance. Matt and I set off independently, both going at our own pace. I’d let Matt go off ahead and when that competitive edge kicks in, it can be hard to stick to your plan, to restrain yourself from pushing ahead to catch up with other runners. The trails were great with the first section comprising lots of single track winding between hedgerows, through woods and along fields. The route isn’t without its climbs, taking in approximately 4000ft of elevation over the duration. 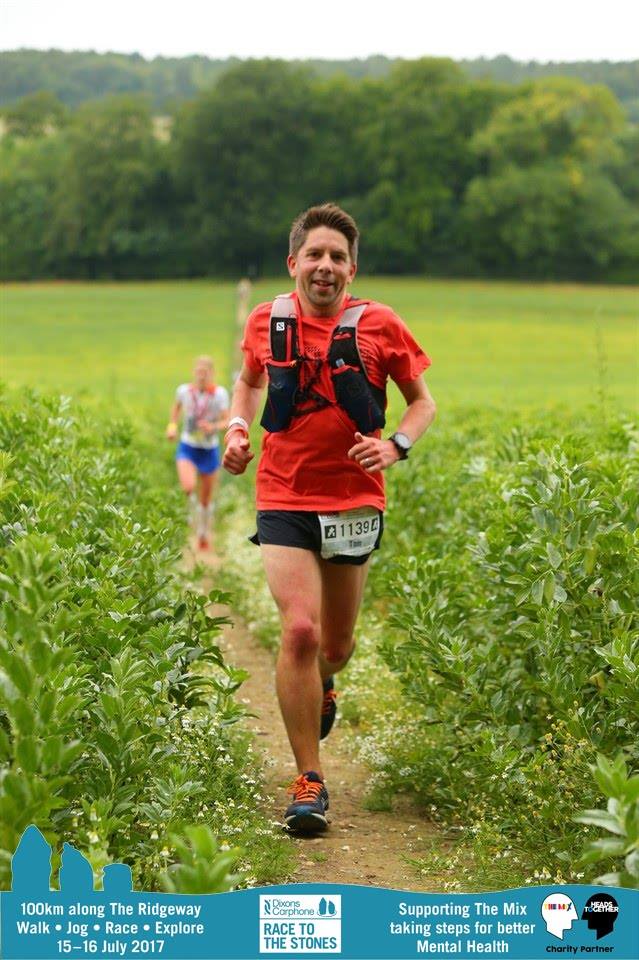 Shortly before the first checkpoint I caught up with Matt, who’d take a quick pit stop, and we were soon running side-by-side. The field was pretty stacked with the likes of GB ultra runner Tom Payn leading the way. We’d let a lot of runners go off ahead at the start, so it wasn’t obvious which positions we were currently in. The route took us through the famous “Field of Dreams”, a corn field with its ever changing colours dependent on the weather and climate, across a golf course and through woodland trails with excellent downhill tracks, the sort where you can really stretch your legs and make up some time as you glide across the surface, dodging the slightly protruding tree roots. There had been some light rain in the air, the grey clouds ensured that the sun didn’t make it too unbearably hot, but it was still a humid July morning. We had support on the route from my wife Pip and our friend Kate who popped up at various road crossings allowing us the opportunity to refill our drinks.

The miles were soon disappearing and I had confidence that I’d be able to complete the distance, I remember saying to Matt at one point that I knew we still had over 40 miles to go, but it didn’t worry me. What I wasn’t prepared for were the tough and dark miles that I was about to experience between miles 35 and 50.

A race of two halves 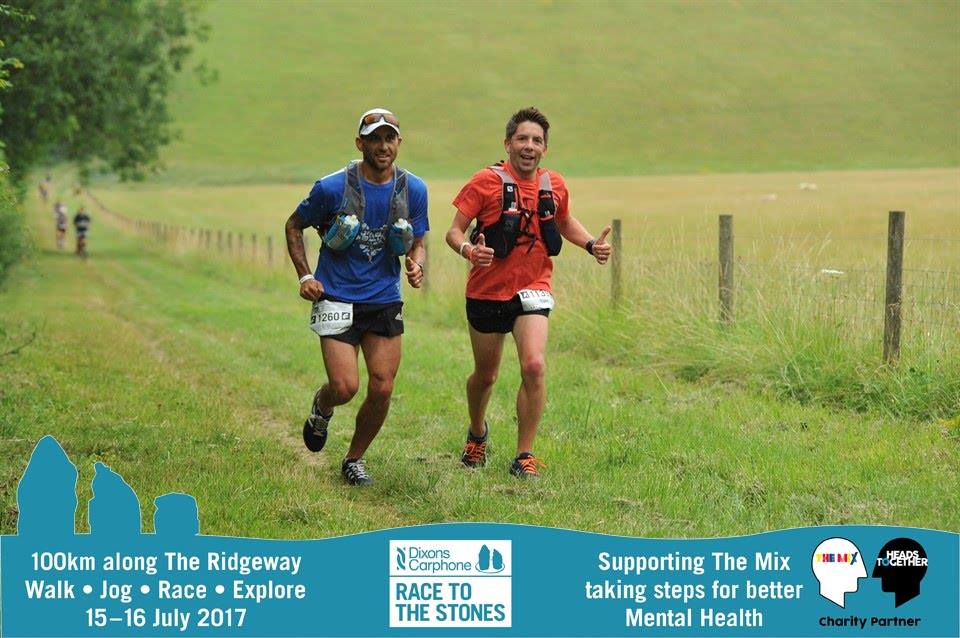 We had made it to half way, slightly confused about which way we went through the half way finishing arch before heading straight back out onto the course. We sailed through the next few miles but at the foot of a hill I suddenly felt like it was becoming a struggle. There was pain, not excruciating pain like when you’re injured, but an exhausted type of pain, hard to describe. The miles from RTTK, coupled with continuous training were beginning to take control. I knew that I had to try and dig deep, keep my legs turning and get my head down if I was going to complete this challenge. I waved Matt ahead, saying that I would see him at the finish, it was time for my own space and I didn’t want to hold him back.

The next 15 miles were some of the toughest I’ve ever run. I reached a checkpoint, doubled over, hands on knees and Pip wondered if I was going to carry on. There was no question, I had to carry on. A sip of flat coke, a handful of crisps and I was on my way, across the tough, chalky surface of The Ridgeway, positive thoughts attempting to push me forward to the finish. I’d been reaching checkpoints, not stopping for long, just enough time to refill my bottles and have something to eat. Other competitors had been going past, overtaking me and I knew that I was slowing.

The miles continued to tick off and I was nearing one of the final checkpoints at mile 50. I stopped for slightly longer, a cup of coca-cola, a packet salted crisps and some ice spray on my knee, to aid a slight niggle I’d picked up en-route, were what I wanted, these were the things I knew were going to see me to the end. Two other runners had joined me, we chatted for a minute before I started to make my way out to The Ridgeway. I set off feeling like a new person, I don’t know what had changed, I had new energy levels and sheer determination to complete the challenge ahead. There was no way that I was going to allow these runners to overtake me, I’d had enough of that!

As I rounded a corner I could see Pip waiting to see me come past, feeling like a new man I took a little packet of Haribo sweets, needing the quick sugar hit to keep me going, I was running faster than I had done in several hours. It felt amazing. The ridgeway climbed, the views were brilliant across the Oxfordshire countryside. I kept going, my watch was telling me that I was getting faster and all I wanted to do was see the stone circle at Avebury and run over the finish line.

At the final checkpoint, located at Liddington Castle, the volunteers cheered me on. They recognised me from RTTK and I had a friendly chat with them. All of the volunteers and staff at Threshold were amazing, really friendly, supportive and professional, you definitely felt like you were being looked after. They warned me that when you reach the stone circle you actually have to double back on yourself before reaching the finish, a handy tip as what ensued was slightly chaotic and a rather confusing finish for some.

As I descended to the road from the ridgeway, I could make out the finish at a farm in the distance, the distinctive inflatable arch and lines of flags made it easy to spot. I ran along the road, noticing that there were arrows going in the direction I was running, but also the other way, this must be the u-turn. As I got closer to the stone circle a photographer spotted me and jumped out of his car, he was quickly running along side me and ushering me through a gate to my right. He explained that the land owners of the stone circles had asked them to remove all arrows and route signs from within the stone circle, therefore he was directing me whilst also trying to take photos. He said that marshals were on their way, however as an early finisher there hadn’t been time to get anyone there. After 62 miles it’s not easy to process information and I did my best to make my way out and back to the road. Luckily I’d checked the route map, so had a good idea of which way to go. 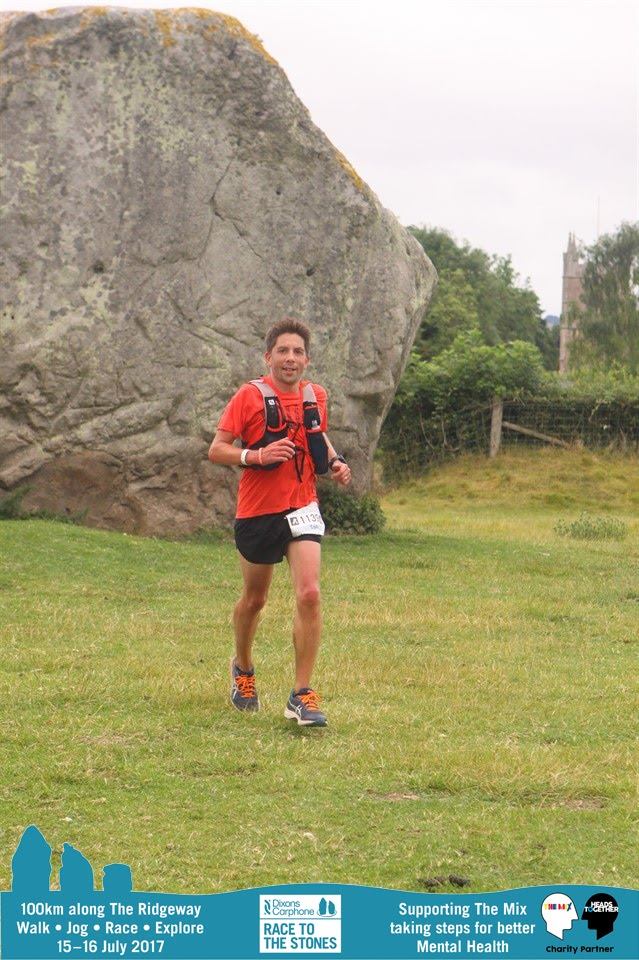 Running back along the road and taking a left-hand turn along a grassy field, just before the final finishing straight, another runner overtook me, accusing me of cutting the course short. Slightly taken aback, but knowing that I’d run the route that I’d seen on the website, I said that I thought he’d perhaps taken a wrong-turn. It turns out that he had and the removal of signs at the stone circle had made for a confusing finish for a couple of runners just ahead, including Matt. I crossed the finish line and thought that it was odd not to see Matt and Pip waiting for me, I didn’t realise that they were still out on the course. They joined me a few minutes later, an unfortunate wrong turn meaning that Matt had added over a mile onto the course, however he still finished in an amazing time, a 100km PB. 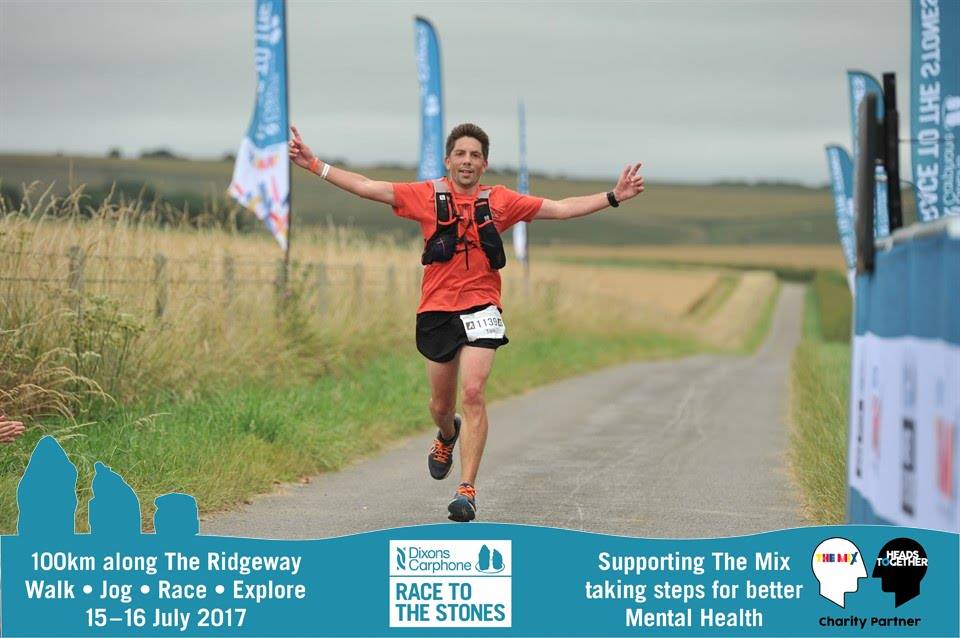 I was surprised to hear that I finished 6th in a time of 9 hours 10 minutes. I wasn’t expecting to finish anywhere near that quickly and had no idea that I was in the top 10. A good section of the course had almost wiped me out but I’d just finished my first 100km and it was a fantastic experience. The two Threshold Sports events that I’ve completed this year were both incredible and next year, who knows, I might try and do the triple! For now though, it’s some rest and recovery whilst I work out what the next challenge is going to be.

Scroll down for the Strava.