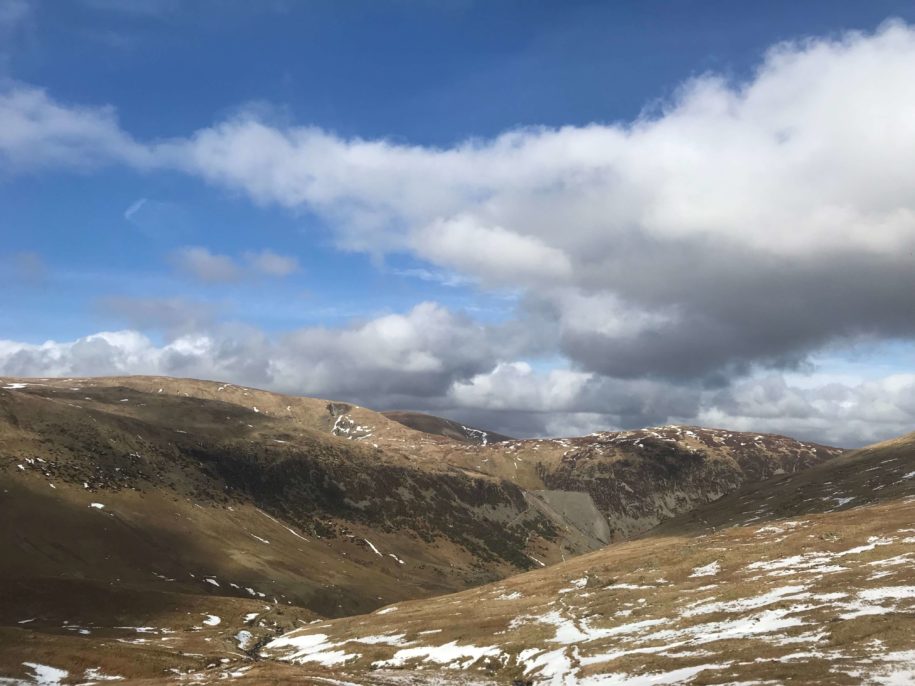 Last weekend I headed up to the Lake District for Mountain Run’s Ultra Trails weekend. The training weekend is run by Charlie Sproson, an accomplished mountain leader and coach with multiple Bob Graham Rounds, a Charlie Ramsay round and Dragons Back race all on his running CV. He’s also the race organiser of the Scafell Sky Race and the Lake District Sky Ultra.

The two day course, held just outside of Glenridding – surrounded by an impressive view of the peaks including Hellvelyn, Catstye Cam, Birkhouse Moor and Raise, is designed for ultra runners or aspiring ultra runners, giving them the skills needed for tackling long distance ultra races. It’s a course for everyone, from trail running addicts to first-timers.

It was a packed schedule from arriving on Friday evening right the way through to leaving on Sunday afternoon with brilliantly designed sessions, guest speakers, running, skills and amazing food! There were 30 keen runners in attendance and we spent the weekend split into two groups so that everyone had chance to participate, ask questions and get involved. The majority of runners had ultra marathons planned in 2018, ranging from the Lakeland 50, 100 and 10 Peaks Challenge to Rat Race’s The Wall, following the route of the historic Hadrian’s Wall.

I’d highly recommend this weekend to anyone who’s interested in training for an ultra or mountain event and looking to learn new skills, work on technique and become the best ultra runner that you can be. Charlie, Nic and their Mountain Run colleagues certainly know their stuff! If you’re interested, find out more at – https://www.mountainrun.co.uk/courses/ultra-trail-running-weekend-2018 or read on for my account of the weekend. 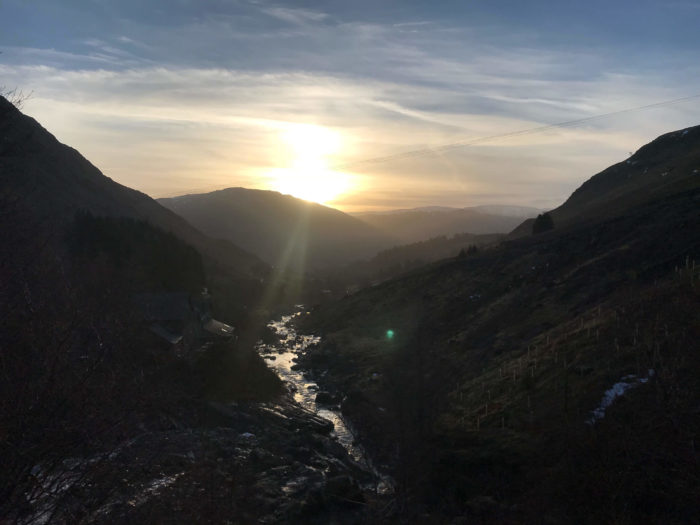 After a rather long drive up to the Lakes from Suffolk (one of the UK’s flattest counties) I arrived at Glenridding in the early evening, after a little bit of back and forth on a small track in an attempt to find the Bury Hostel where we were staying for the weekend. The views from the doorstep were amazing, surrounded by peaks and looking out over to Ullswater. We’d just had a week of heavy snow across the UK and I certainly had enough kit in the car for every eventuality!

After carting my kit into our dorm and meeting some of the other runners over a quick cuppa, we headed out for a social headtorch run around the surrounding tracks, fells and countryside. One of the best things about this weekend is that there are no egos, it’s not about pace, times or competitiveness – we’re all on the same level, there to enjoy it and get the most out of the weekend that we can.

The run was great fun, a good opportunity to meet other runners and also try out some of our kit. Check out the Strava below for more details.

This was followed by a rather tasty vegan pasta dish. For ease, the catering for the weekend was all vegan with dairy options and I’ve got to say that it was really good, I certainly wasn’t left hungry! We were also joined by Casper and Katie Kaars Sijpesteijn who both won the Lakeland 50 and set course records in 2017. They did a great informal presentation and Q&A session, talking about everything from training to racing, nutrition and pacing. 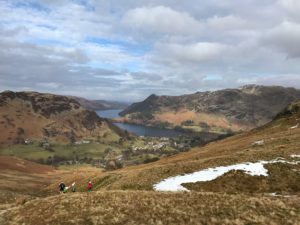 It was an early-ish start for a Saturday with breakfast between 6:30 – 7:30am (or a 6:30 run out onto Birkhouse Moor with Casper for those who were game!) before the first session of the day with previous Lakeland 100 winner Paul Tierney from Missing Link Coaching. Paul’s session was all about natural movement, focussing on everything from stretching to running up and down hills efficiently. Paul has a wealth of knowledge and his tips and tricks certainly made a big difference when putting them into practice on the surrounding hills.

Next up was a session focussed on Nordic Walking and running with poles. Nic Sproson runs Nic’s Nordic Walks and had designed a session that allowed us to check out the benefits of Nordic Walking, practicing our technique and putting it to test on the hills that surround the Bury Hostel. Charlie then demonstrated running with poles, taking us out on the trails to practice flying up and down hill; seeing the difference that the poles made. I’m still yet to buy any poles but can definitely see the benefits of using them for both ascending and descending the fells.

I’d really been looking forward to the next session – navigation. As I enter more and more ultra races, there’s often a requirement to be able to navigate using a map and compass. Unfortunately it’s been a fair few years since I first learnt these skills in the Cubs and Scouts, so a brush up is always welcome! I’d gone along equipped with my Silva Ranger compass. It’s not had much use outside of training so far, but it was put to the test on Saturday night and definitely lived up to expectations. 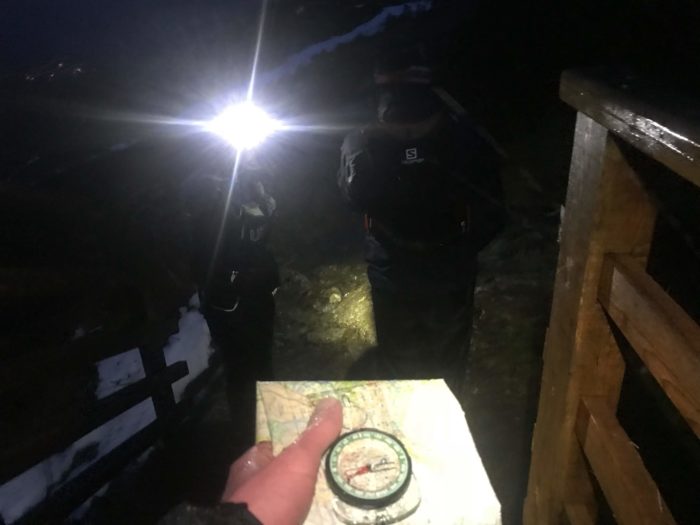 We first went through some theory with Charlie using the official Harvey marked maps for the Lakeland 100 and 50 route; understanding the maps, scale, colour coding, symbols and differences from other maps, such as Ordnance Survey. We then looked at using the compass alongside the map, thumbing the map to keep a constant location and navigating between two points. This was all in preparation for a getting out on the trails for a practice around Glenridding. We headed out just as it was transitioning from dusk to night in the pouring rain – I was glad to put my Montane and Salomon taped seam waterproofs to test (they stood up to the challenge!). Using the Lakeland maps we set start and finish points, got a bearing from the compass and then navigated to the next point until we had covered a loop back to hostel. There were certainly some challenging navigational points and it was made even harder in the dark by headtorch, but some seriously great skills were learnt that will aid me on future challenges.

After dinner on Saturday night we were joined by Michael Jones, 2017 winner of the Lakeland 100, who gave a great talk about his training for ultra events. This included nutrition, preparation, running the event itself in terms of pacing and maintaining fuel at checkpoints. It was a great insight and really interesting to hear quite a scientific approach to training. Michael has organised a couple of ultra trail events this year in Snowdonia with a 50 and 100 mile offering – check them out on Apex Running.

It was the final day of the Mountain Run Ultra Trails weekend and I really wanted to make the most of my last day in the Lake District. With a 5-6 hour car journey ahead of me, there was only one thing for it – fit in as much as you can! 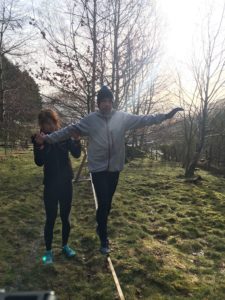 Another fairly early breakfast meant that we were straight into the first session at 8am. I’d originally thought about just going for a social run, however the other option was slacklining. Over the weekend I changed my mind and transferred into the slacklining group – I can run any day (albeit not in the Lakes) but the chance to try something new always grabs my attention! If you’re unfamiliar with slacklining, it’s pretty much like walking a tightrope, putting your core skills to the test. It was definitely a learning curve from just getting onto the line through to taking some steps forwards and backwards. However, with a couple of reliable shoulders to lean on, I was soon up and away, doing something that I never imagined doing. You can really see how it works your core and helps to build the balancing foundations that will aid your steps on the mountains when the rocks are moving beneath you.

Next up was yoga for runners with Shelley Barlow of Inspired Life Yoga. I found out how inflexible I really am! Like many runners there are a few things that I fail to do as often as I should… this does unfortunately include stretching and using the foam roller! Whilst I do try, I’m not doing it as much as I should and the yoga for runners session really highlighted this. It was really good to see how this impacted my flexibility, but also how the flexibility can in turn impact the running. Shelley provided us with some great booklets of stretches and exercises that we can do in our own time to aid our running.

We were joined by Inov8 sponsored ultra runner Damian Hall just before lunch. Damian has a wealth of ultra running experience having complete some of the biggest ultras in the world including podium and top 20 finishes at such 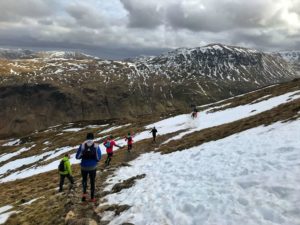 events as the Spine Race, Marathon Des Sables, UTMB, Dragons Back and the Ice Ultra which he won only a few weeks ago. He’s also set an FKT on the 630mile South West Coast Path. Damian gave a fascinating talk about his ultra experiences, how to prepare, how to take on the events and a brilliant insight into the types of events that he’s participated in. It was truly inspiring and has definitely provided some food for thought on how to both tackle ultra races and also future ones to take part in. 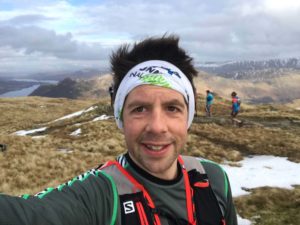 After lunch we headed out for a social run up to Red Tarn, just beneath the summit of Helvellyn. A great chance to put our new skills to the test, enjoy a combination of snow and sun and catch up with friends made throughout the weekend. Damian and Charlie lead the group between them and it was also a great chance to ask any questions in a very scenic and informal setting. I’d previously been in contact with Damian via email, so it was great to catch up face-to-face and talk about everything from journalism to training and upcoming ultra events.

It was certainly a brilliant weekend and one that I won’t forget, the setting was amazing, the expertise across the board – second to none and everyone was really friendly. I’ve come back to low-lying East Anglia with a wealth of ultra running techniques and skills – I just need to put it to the test now!

If you’re interested in any of the Mountain Run courses or events, check them out at https://www.mountainrun.co.uk