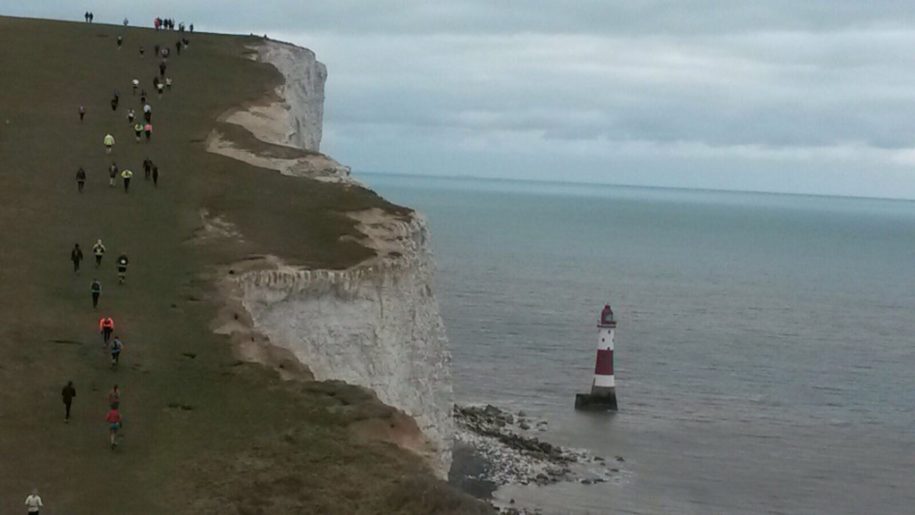 For the first time in four years I found myself going into 2016 without a Spring marathon booked, so I decided toÂ set my sights on another challenge – an ultra marathon.

I’ve fancied having a go at an ultra for a while now, since completing a few marathons, and originally had my eyes set on the Stort 30 back in October. Unfortunately this didn’t happen for a few reasons, so instead I decided to slowly increase my trainingÂ in the same way that I would for a Spring marathon and started looking for an event that I could sign up for.

I’d heard of the EnduranceLife Coast Trail SeriesÂ events, as there is a CTS Suffolk event that takes place slightly further North along the coast from where I live. I knowÂ people whoÂ have taken part in the half marathon and ultra races and they’ve only ever had good things to say about the events, soÂ with the Sussex edition taking place towards the end of March, I thought why not and signed up!

CTS Sussex has a 3/5 – strenuous rating on the EnduranceLife website due to the South coast terrain. There are four events all taking place at the same time with runners being able to select from a 10k, half marathon, marathon orÂ ultra. The routes take in similar scenery, with the exception of the marathon and ultra, which head out on an extra loop towards Wilmington and Folkington before heading back to the coast through Friston Forest (route map can be found here). Starting just West of Eastbourne at Birling Gap, the route heads across the undulating Seven Sisters and loops round towards Eastbourne before looping back to Birling Gap. Those doing the ultra then had to run past the finish line and continue for another loop of approx 8 miles.

We’d booked accommodation in Hellingly, aroundÂ 12 miles away from the start, meaning we could get up at a reasonable time and make it to the start before the briefing at 8am. I was probably a little too relaxed about getting there in time and when we arrived we were directed to the overflow car park, a good walk from the start. After jumping over a wall and barbed wire fence, we made a speedy walk up to the start to collect our numbers (Pip was doing the half marathon), collect our souvenir t-shirts and get ready for the briefing. We bumped into Stephen from Film My Run at the start, who we had seen a couple of weeks previously at the Heartbreaker Half Marathon in the New Forest, he was also running the ultra and made a video of the event which you can see here.

The course was challengingly brilliant, heading out, following the coastline over the Seven Sisters, the downhills were almost as brutal as the ups in places! The ultra and marathon routes took in fields, tracks and woodland trails as we made our way through some quaint villages too. I felt pretty good as we covered the first 15-18 miles and fell into a fairly comfortable pace. I think I did start a little too quickly, although starting pace was a fair bit slower than my marathon pace, so it was a little hard to judge.

At around the 19-20 mile mark we joined up onto the same course as those doing the half marathon and 10k. I knew which of the ultra runners I’d been following up until this point, however as it became busier I lost sight of them and tried to maintain my pace, which was tricky due to the fast runners coming passed that were doing the shorter distances – I wanted to go with them but knew I still had a lot more to do!

As we all looped back towards the finish, which was around the 26.2 mile marathon mark for me, everyone else was finishing their races, as we headed off for another loop of 8 miles. It was quiet lonely heading off again on my own, as the runners had now spread out, but I knew that I just had to do this loop and I’d have finished. It became increasingly difficult as my legs were cramping going down the hills. Another runner gave me a salt tablet which definitely helped me through to the finish.

As I rounded the final corner towards the finish, I could see Pip cheering me in. I crossed the line having clocked 5:58 for my first ultra at a distance of 34 miles. I was really happy with the time, finishing 30th out of 100 finishers and what’s more – I really enjoyed the run and experience. I’ve definitely got the ultra bug now and will be on the lookout for more events. As I mentioned earlier, CTS have a Suffolk event in my home county, I might just have to sign up!