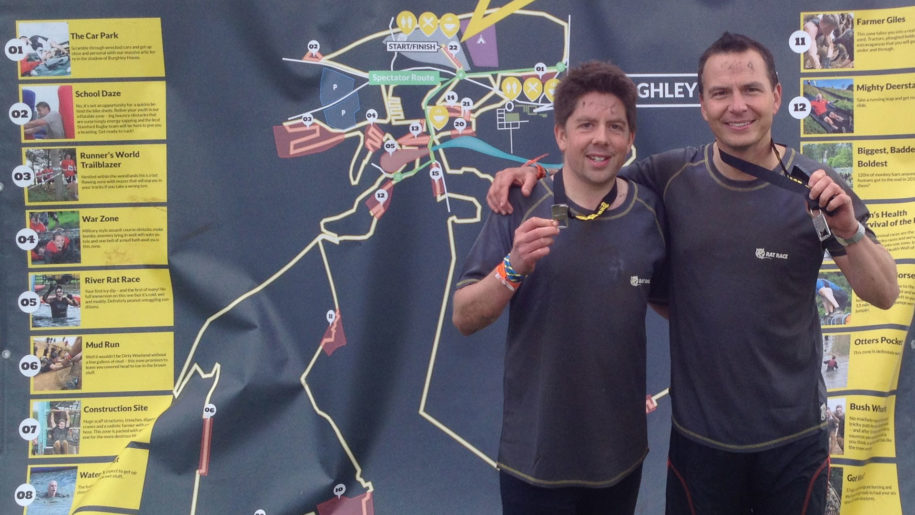 Friday 8th – Sunday 10th May saw the Rat Race Dirty Weekend descend on Burghley Park in Lincolnshire. My friend and colleague, Matt Horsup, had talked me into signing up for the event and it soon became apparent that this wasn’t to be any race, this was 200 obstacles over 20 miles – the World’s largest assault course!

Having only previously run in one other obstacle race, the (relatively short in comparison) Whole Hog in Suffolk, I thought that I knew what to expect, although the distance and number of obstacles were going to make this even more of a challenge.

Rat Race do a great job of turning the event into a mini-festival, with camping, a beer tent and live music on both the Friday and Saturday evenings. We headed down on the Friday night to pitch our tent and prepare for Saturday’s run.

When booking online you choose a starting wave time for the Saturday morning. Having entered the race quite late in the day, there weren’t many options left and we were down to start at 10:45am. This wasn’t too bad, but did mean that there were already hundreds of competitors ahead of us on the course with the first wave starting at 8am and more waves setting off every 15 minutes.

10:45 arrived and we lined up ready for the 20 miles of obstacles that were up ahead. Not feeling too daunted by the challenge, we set off and in no time we were jumping over hay bales, climbing through old cars, crawling through mud and climbing over walls.

Rat Race split the course into several zones, each made up of different types of obstacles, giving you a taste of some of their other races with the Runner’s World Trailblazer and Water Wipeout zones. See a map showing all of the different zones here.

Interspersed with a few miles of running, these zones covered a huge area of Burghley Park, just outside Stamford, and the course took us along tracks and trails, through farm yards, lakes, alongside golf courses, under dual carriageways and through lots of woodland before finally ending back in the grounds of Burghley House.

The areas of the course where you could run without stopping for obstacles were not too crowded and we actually managed to make up quite a lot of ground. I actually left my ever-present Garmin watch at home, for fear of it becoming damaged, so I’m not quite sure what pace we were going at. We were held up at a lot of obstacles and from around the 5-6 mile mark this seemed to become worse as more waves of runners caught up with each other and we found ourselves in long queues for climbing walls and other obstacles.

We did end up stationary just before the water wipeout zone where, after already wading and swimming through a lake, we had to wait in a queue for a buoyancy aid so that we could cross the zone. Already wet and shivering as we got colder, we ended up waiting around an hour for our buoyancy aids, by which time we were looking forward to getting back into the water in the hope that it would be warmer than we were!

Not to be deterred, we launched ourselves back into the lake and the Water Wipeout zone was good fun, crossing the lake by swimming between floating plastic rafts, climbing up onto them before jumping back in and swimming for the next one. Some hanging rings helped us back onto dry land before we started a run, up and over some man-made mud hills before climbing up 20ft scaffolding. At the top, the only way back down was to jump off and free fall into a man-made pool.

If I learnt one thing from the weekend, it’s that I really need to improve my upper-body strength! There were lots of sheer walls to climb over, including the famous Men’s Health survival of the fittest 8ft wall and the absolutely huge finish-line obstacle which was sheer wall after wall before descending back down some wooden steps and dropping down another wall. Massive thanks to the two guys that helped me out with these, giving me a leg up and then pulling me up onto the next platform!

It was a great experience and the distance, along with the obstacles makes it a real challenge. There is the option to opt-out at half way, if you don’t fancy the “full mucker”, but there was no-way we were going to become “half mucker’s”! I think that normally you’d probably have had enough by around 13 miles of running and obstacles, at the Dirty Weekend you’re only just over half way!

The weekend was rounded off with live music and great performances in the big top from Reverend and the Makers and BBC Radio 1’s Greg James as the party continued into the night.

If you’re thinking of giving it a go next year, here are some top tips and pearls of wisdom;

Matt was raising money for the Alzheimer’s Society by running the Rat Race Dirty Weekend. You can sponsor him on his Just Giving page.